If you’re an Android fan, or even just a tech buff in general, you’re probably waiting for 10th August, also known as Samsung’s Galaxy Unpacked event.

Aside from finally witnessing the eagerly-anticipated launch of the latest Galaxy Z Fold 4 and Galaxy Z Flip 4 phones, there’s another highly-awaited update – for the brand’s Galaxy Watch series.

Well, as it turns out – you don’t need to wait quite so long. Now you can read on to get a first glimpse into the leaked renders of the Galaxy Watch 5 and Galaxy Watch 5 Pro.

A sneak peek at the Samsung Galaxy Watch 5 Series 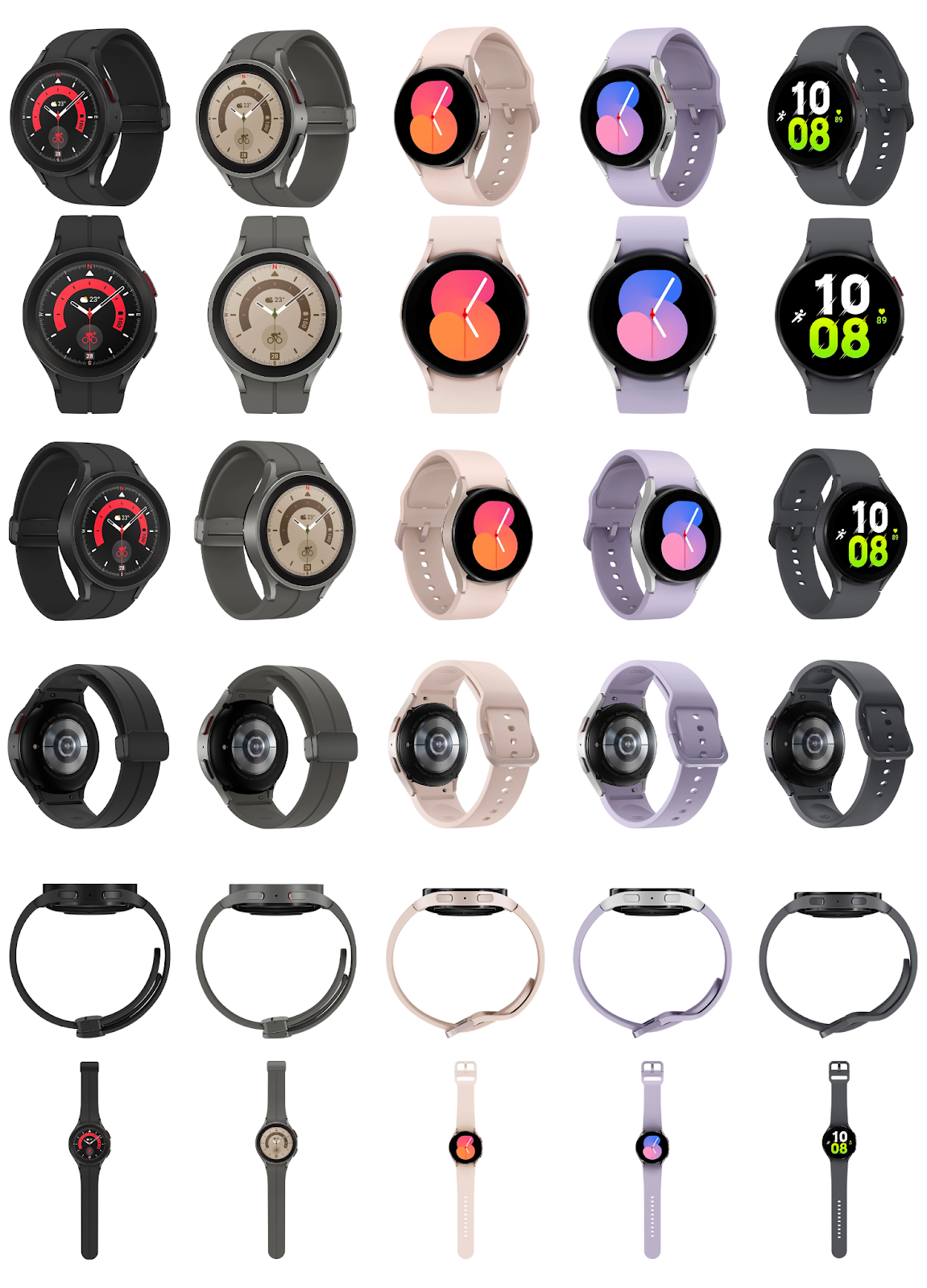 Based on these realistic renders – originally shared by Evan Bless – users now know that the Galaxy Watch 5 and Galaxy Watch 5 Pro will be quite similar in appearance to their predecessors, with one notable exception: the availability of colour choices.

While the Galaxy Watch 5 Pro can be seen in the classic black and grey, the Galaxy Watch 5, on the other hand, now seems to be appearing in a variety of more vibrant colours such as purple and peach, on top of the signature staple colours.

Also, the new Galaxy Watch 5 Series seems to have round displays that exclude the rotating bezel formerly used primarily for navigation. Instead, the round dial seems to blend with the smartwatches’ silicon straps, and each watch comes with two physical buttons.

Although the design changes aren’t significant, there are quite a few modifications made to the operations of both smartwatches.

Aside from now being available in 40mm and 44mm sizes, both the Galaxy Watch 5 and Galaxy Watch 5 Pro will have both LTE and Bluteooth variants. All of this will also be added to an improved chip, plus a bigger and longer-lasting battery – so you don’t have to kancheong about running out of battery while you’re out and about for the day.

The new Series should also boast the all-new One UI 4.5 based on Wear OS 3.5, announced previously in July. This updated user interface offers its wearers the capabilities of a full QWERTY keyboard, as well as swipe gestures, to make typing or dictating messages and switching between inputs even easier than before.

And finally, after Samsung’s announcement about including a body temperature sensor earlier this year, this new feature is something we might finally see in action with the launch of these two new smartwatches.

All that having been said – it’s definitely still worth tuning into Samsung’s Galaxy Unpacked event on August 10th to find out the full extent of these new features.

If you’re excited about the new Samsung smartwatch launch and its connectivity, there’s an even better way for you to seamlessly enjoy your mobile experience – whether you’re wearing it at home or on the go.

M1’s NumberShare service allows you to share your data, SMS and talktime from your mobile plan straight to your phone for just $6.90 a month. This means you can pick up calls just by tapping a button right on your wrist.

What’s even better is new subscribers can enjoy their first six months completely free of charge!
Still contemplating porting over? You’re in luck. mPowered readers exclusively can enjoy $15 off their first month with M1! Just sign up for your M1 SIM-only plan and elevate your connectivity today!