4 Addictive Mobile MOBAs According To Singaporeans

Gamers were once otaku types who hid at home with no social life. With the increasing popularity of multiplayer online battle arena (MOBA) games, this is no longer the case. In a MOBA game, two teams of players compete against each other using teamwork and strategy with the ultimate goal of beating the other team, either by destroying their base or earning points. You can attack together with your teammates and also defend and heal them.

Many of the great MOBA games that Singaporeans love also have mobile versions, so it’s not unusual to see gamers huddling over their devices in a group, having heated discussions about strategies and teamwork as they battle in their virtual arenas. Thus, gaming has become a social activity and a professional sport. Players can even form teams and enter competitions to earn money. You heard right!

MOBAs tend to be a little complex and thus best played on a desktop with a mouse and keyboard, but there are also some mobile MOBA games as well that have gained popularity. Naturally, the awesome thing about mobile MOBAs is that you can play on the go. They are usually free to play with some in-app purchases.

Here’s our curation of 4 best mobile MOBAs that can be found on Android and iOS right now. Ready to play?

Mobile Legends Bang Bang (MLBB) is a mobile MOBA game well-loved by Singaporeans. Released in 2016, it features a battle arena with three lanes. Two teams of five go against each other in real time to take the enemy’s tower and defend their own. Heroes do not train to level up, but rely on skill, strategy and ability.

The game became so popular in Southeast Asia that its creator Moonton launched it into the esports scene with regional tournaments named Mobile Legends: Bang Bang Professional League (MPL). In fact, in Singapore, MLBB offers the highest prize for any local professional esports tournament, with $100,000 up for grabs. Overall, MLBB achieved an all-time gross of USD $1 billion with 44% of its revenue coming from outside Asia.

To get the most out of MLBB, sign up for the M1 MLBB data pack to get unlimited data access when playing the game, for just $5 per month. You get 80 free diamonds in-app every month, and direct and convenient payment via your M1 bill.

Modified from League of Legends, the Wild Rift mobile MOBA is published by Riot Games for Android and iOS. It’s frequently abbreviated as LoL: WR. In the game, each player controls a character. Teams go against each other or a team might go against AI-controlled players, for the objective of destroying the opposing team’s Nexus.

Each match is an opportunity for players to increase in strength, either by gaining items or experience. The good thing about League of Legends is that all players start on the same footing. Its story is fantastical, written around different champions. Game times are usually between 30 to 45 minutes. 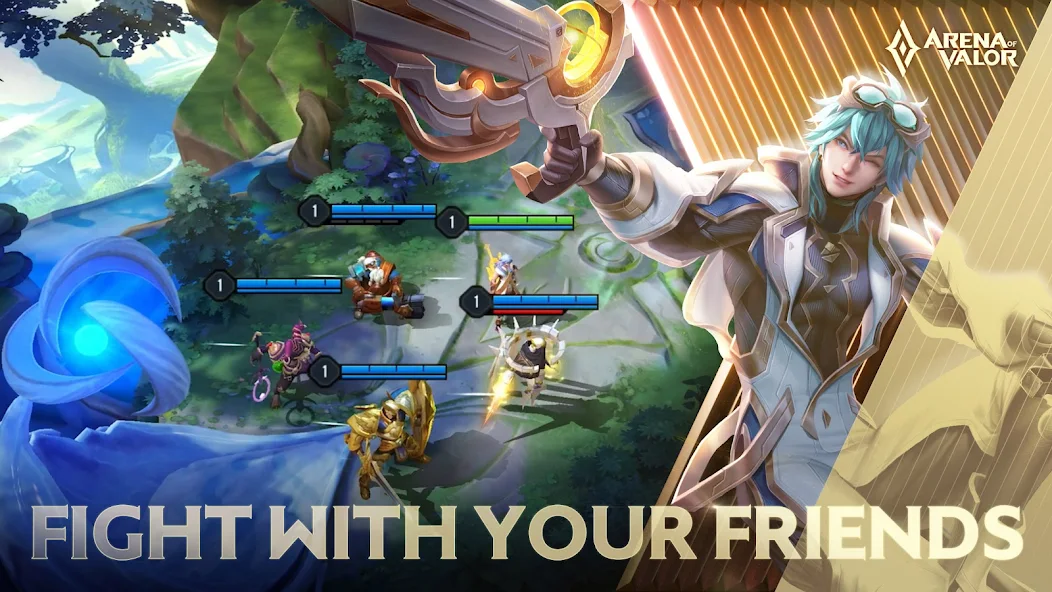 Arena of Valor (AoV) is another MOBA that is quite similar to the above three games. It is also 5v5, with three lanes – top, bottom, and jungle –  and the goal is to destroy the other team’s base. Apparently, redditors review that it is the best mobile MOBA game as despite its stellar animations, it offers the best experience transited from the PC due to its low system requirements. Each match lasts from 12 to 18 minutes. Available on Android, iOS and Nintendo Switch.

If you’re totally new to 5v5 MOBA games, this one might be an easy game for you to dip your toes in. Pokémon Unite is an online MOBA developed by TiMi Studio Group and published by The Pokémon Company quite recently in 2021.

Each match is limited to 10 minutes. The main goal is to collect points by catching wild Pokémon. Your Pokémon will level up, learn new moves and evolve. That’s all you have to do – there aren’t that many items or weapons to strategize with. The team with the highest total score wins.

For a shorter gameplay, players can also go to Quick Battle, which is only five minutes long with three or four players on each team. It’s much simpler also because the map is less convoluted with only two lanes. It’s also super cute of course! Available on Android and iOS, and also can be played on Nintendo Switch.

MLBB is arguably the most popular MOBA game out of the above list. Play without worry of data running out by paying just $5 per month for the M1 MLBB data pack.

Psst, don’t forget to redeem $15 off your first month with M1 – exclusively for mPowered readers only! Hurry and enjoy this amazing discount now!